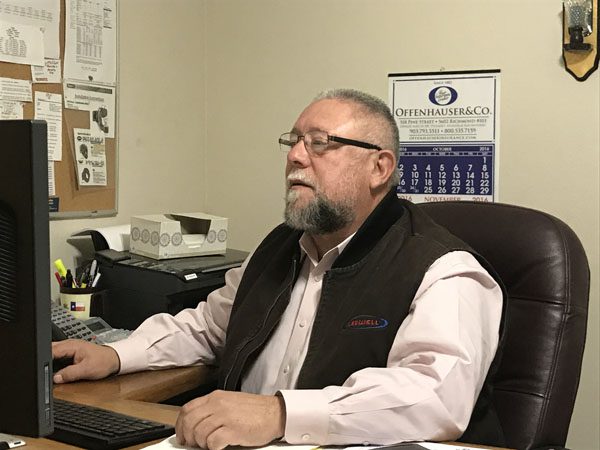 Kenney Cecil has been a part of the Ledwell team since 1989. He started his career in the Truck Shop building various pieces of equipment. And then after 11 years in the Truck Shop, he was promoted to shop foreman.

Since 2003, Kenney has been an integral part of the Ledwell Sales Team. He enjoys talking to new people about Ledwell and explaining everything we have to offer.

One of his most memorable times at Ledwell was when he and Phil Bocox drove a feed trailer up to a feed mill in Arkansas to demo the trailer. Things got a little intense and complicated, but ended on a positive note. This particular customer showed them true hospitality that they had never received before. “That is one trip I will never forget,” Kenney said.

Kenney has been married to his wife, Mona, for 27 years and they have three children: Stephanie, Lisa, and Lee. Both Lisa and Lee also work at Ledwell and Stephanie is a 911 operator. In his free time Kenney enjoys hunting, fishing and camping with his family.

“I have known Kenney for the last 27 years. He impressed me with his energetic learning ethic. As he went from the plant to sales, he was conscientious in becoming a salesman. Kenney has honed his craft to the point of almost perfection. I am very proud of him as a friend and a valued asset to Ledwell. ~ Phil Bocox